The History of the English Language 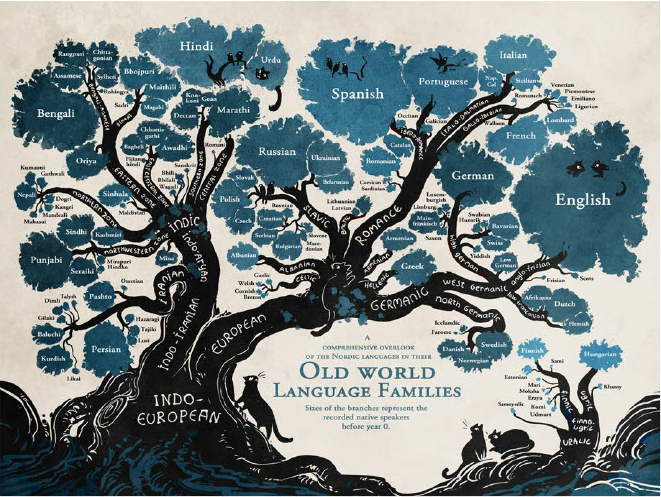 The History of the English Language

Have you ever wondered why English is the way it is? Have you ever asked where it came from? Most people don’t think about their native language this way! Just like humans, languages evolve over time. Modern English is the product of thousands of years of changes. So, how did English evolve? And is English still evolving?

English is part of the Indo-European language family. Just like with animals, languages are classified by families. They can also be represented as a branching tree. Scholars use these representations to show how closely two languages are related.

Many of the European languages we know today are from three branches of the tree: Balto-Slavic, Italic, and Germanic. The Balto-Slavic language branch has languages like Ukrainian, Polish, and Russian in it. Italic contains the Romance languages like Spanish, Italian, and French. The Germanic family contains languages like German, Danish, Norwegian, and English.

Three Germanic Tribes Started It All

The very first form of English started around the 5th century. Three Germanic tribes sailed to Great Britain in search of new land. The three tribes came in contact with the inhabitants of the island, who were called Angles. The Angles spoke a version of Celtic. Soon, as the tribes all mixed Old English developed. Old English is completely different than English today. However, we do still use some Old English words today. For example, the words day, chest, heart and the verbs be and think all come from Old English.

Conquerors Were the Ones Who Really Made English

Once Old English was established, it began to change rapidly. Each time another tribe or king conquered Great Britain, English changed.

First, in the 9th century the Vikings landed. The Vikings came from Denmark and spoke Norse. We still use many words in English that have Norse beginnings. For example, husband, law, and murder are all Norse words.

Next, the Normans invaded. The Normans were the rulers of what is modern day France. In 1066 William the Conqueror invaded and brought old French to Great Britain. William made this French language the official language of the courts. Commoners spoke Old English while upper classes spoke French. Because of this, many French words became a part of English. This new combination was called Middle English.

If you read Middle English today, you likely wouldn’t understand it! That’s because it came before the Great Vowel Shift. This Shift made vowel sounds shorter. The Great Vowel Shift happened between 1400 and 1700. This created Modern English.

More than 379 million people speak English around the world as their native language. In addition, English is the most common second language across the world. English is important for international business and science. As our world becomes more global, English speakers come from more and more countries. This means that words from other languages get absorbed into English. Plus, new types of English emerge. For example, in India many people refer to the English spoken there as “Hinglish.” Hinglish is a mix of Hindi and English and is used by hundreds of millions of people.

There are many examples of words from other languages that are now used in English. For example, the word kindergarten is German. It translated to “children’s garden”. On the other hand, the word glitch comes from Yiddish. In Yiddish glitch means “a small problem.” Lastly, you may be surprised to learn that the word chocolate originally comes from the Nahuatl language of Mexico. The original Nahuatl word was spelled xocolatl then became chocolate in Spanish and was pronounced differently in English.

Even native English speakers change the language over time. For example, did you know the word laser is a new English word? Laser was the abbreviation for light amplification by stimulated emission of radiation. This was too long for most people so laser became its own word. Other words like this include taxi (from taximeter) and mob (from mobilus vulgus). Words like yuppie, cop, internet, and fleek have all been created in the last one hundred years.

As languages evolve, language needs do too. Acutrans is at the forefront of the language industry. With professionally trained interpreters and translators, Acutrans sets your company up for success. Visit our website for more information today!