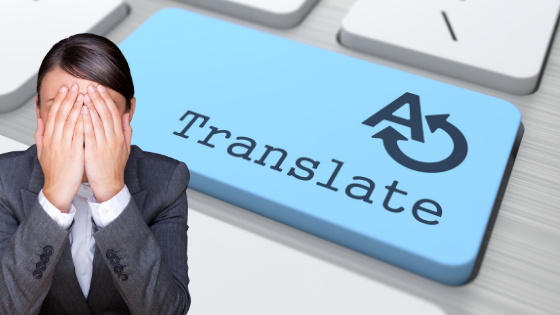 The Importance of Avoiding Translation Fails

Translating your content, whether it is a web series, movie, an advertising campaign, an online article, or your company website, is an effective way to widen your reach and create an impact on more people.

However, you have to ensure the accuracy of your translation or risk losing your translated content’s meaning and intended effect. As the world of business becomes more globalized, translation failures happen across every industry and country. You can find numerous examples of translation fails on the internet, even ones committed by some of the world’s biggest brands.

In the best-case scenarios, when a translation fail occurs the translated content makes no sense to your target audience. You fail to have the intended effect on your market and end up wasting precious time and resources on the translation process.

The worst-case for a translation fail is that you might end up with a translation that means something entirely different from what you intended to convey and doesn’t get caught in time, thus impacting clients. These fails have the potential of hurting your brand’s reputation and image in foreign markets by making your company look inept or offending clients in that region.

Thus, it is imperative that you use competent translators and perform multiple checks to ensure the accuracy of the translation if you want to avoid these risks.

Here are a few of the funniest (and cringeworthy) examples of translation fails you can find on the internet.

However, some of the best (or worst?) examples of translation fails occur in advertising. Take a look:

KFC: “We’ll Eat Your Fingers Off”

We’re all familiar with KFC’s ubiquitous tagline “Finger-lickin’ good” in the United States. Unfortunately, when KFC tried to export this tagline word for word to their campaign in China in 1987, they ended up with something much more nefarious.

The Chinese translation of the phrase literally means “We’ll eat your fingers off”! This obviously did not cause a great first impression of the brand in the Chinese market, especially as they opened their first branch in the country.

Coca-Cola had its own translation blunder in China. When the soft drink opened its operations in China for the first time in the 1920s, enterprising shopkeepers took it upon themselves to translate the name “Coca Cola” phonetically into Chinese. Unfortunately for Coca-Cola, the rendition that the shopkeepers came up with, “Ke Kou Ke La”, literally means “wax-stuffed female horse” or “biting the wax tadpole” depending on the particular Chinese dialect.

Unsurprisingly, Coca-Cola executives were not too happy to hear about this. They quickly rebranded the soft drink as “Ke Kou Ke Le”. Although this sounds much less like the original name of the company, it has a much better meaning. The phrase literally translates to English as “can mouth, can happy”.

Coca-Cola was not the only soft drink company that had difficulties with translation when it expanded to foreign markets. Allegedly, when Pepsi tried to take its brand slogan “Come alive with the Pepsi generation” to China in the 1960s, it faced similar problems. Their original translated slogan meant “Pepsi brings your relatives back from the dead.” Unsurprisingly, this caused quite a controversy in the Chinese market and Pepsi changed the slogan before the product went to market.

Coors: Beer Can Cause Diarrhea

Perhaps the funniest of translation fails occurred when Coors tried to translate its slogan into Spanish for its overseas ad campaign. The slogan “turn it loose”, rather unfortunately translated into Spanish as “Suffer from diarrhea.” Hilarity ensued – for everyone except Coors. Obviously, the beer did not sell well in the Spanish market with such a slogan and was later changed.

Movies also have had their fair share of translation fails. The most amusing of these occur when a film production studio tries to translate the movie titles to cater to different markets. Here are a few of such translation fails:

When Christopher Nolan’s masterpiece “The Dark Knight” launched in Latin America, its Latin title was “El caballero de la noche”. This literally means “the Knight of the night” in Spanish.

This is still not as bad as some of the other examples we mentioned in this article. But, with millions of dollars in profits on the line, film studios always make sure that their movies have an appealing name that sells well in multiple markets. This one, unfortunately, managed to slip in between the cracks.

When the R-rated and slightly unnerving dark comedy “Being John Malkovich” was released in Japan in 1999, it had a similar mishap. The Japanese version of the movie title literally means “Malkovich’s Hole” if you translate it back into English. Japanese fans of John Malkovich were, understandably, quite amused with the choice of words used for the title.

Acutrans is exactly such an agency. We offer accurate and culturally suitable translations in over 100 different languages. Read more about our accuracy ensuring procedures here, or contact us now to get a timely translation of your content.

Get a free document translation quote from Acutrans