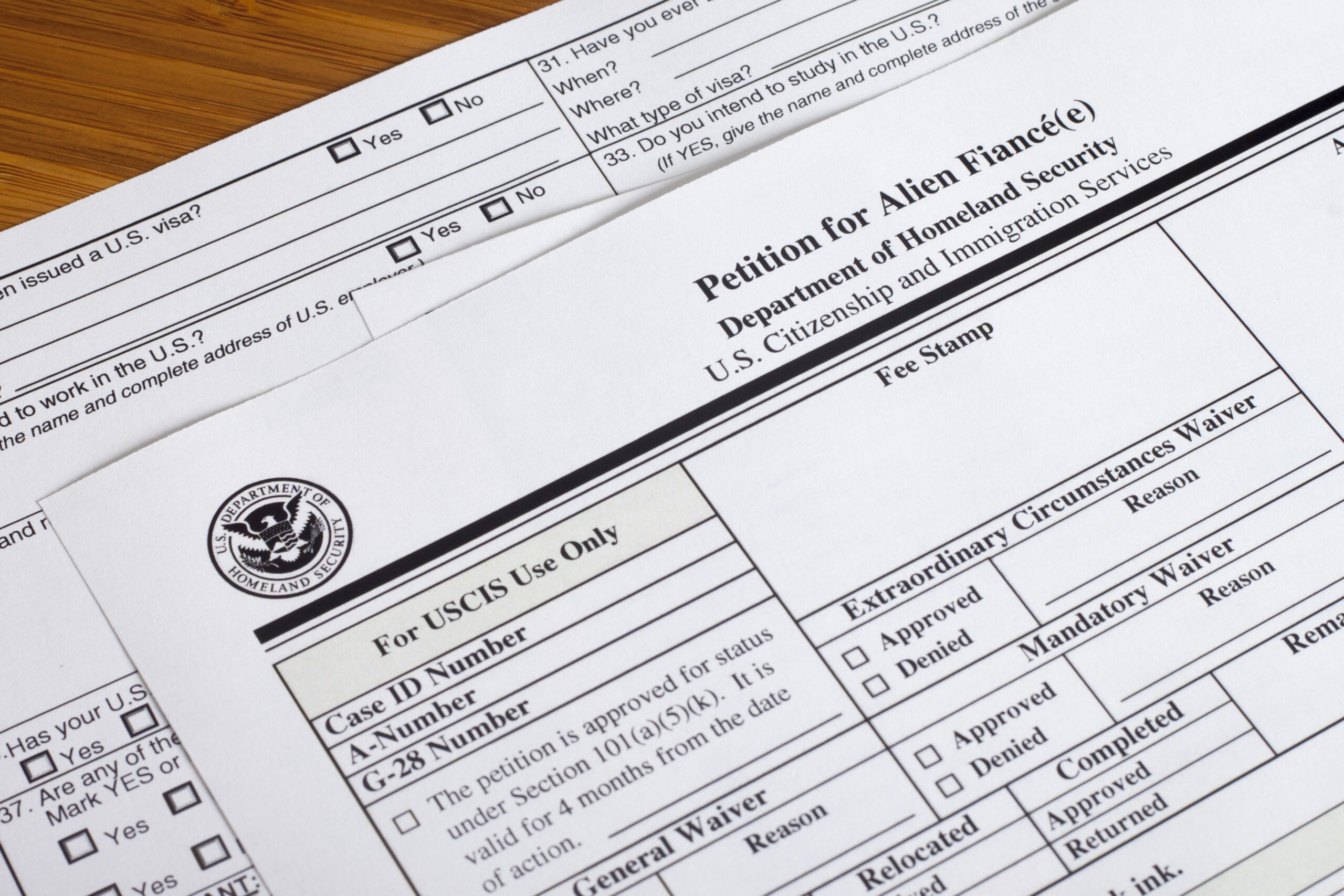 When a U.S. citizen has a foreign fiancé/fiancée, there is a visa that allows the fiancé/fiancée to enter the U.S. for the purpose of getting married. The rules for these visas can be complex, and the process may be lengthy. However, it’s often worth the effort for couples who want to formalize their relationship through marriage.

If you want to learn more about fiancé/fiancée visas in the U.S., here’s what you need to know.

If you need to obtain a fiancé/fiancée, both members of the couple need to meet specific requirements. Those requirements include:

Additionally, the filer must be a U.S. citizen.

Overview of the Fiancé/Fiancée Visa Process

fiancé/fiancée visas can only be requested by U.S. citizens. The foreign citizen fiancé/fiancée cannot file the petition on their own. Instead, the U.S. citizen has to file a Form I-129F, Petition for Alien Fiancé(e), along with supporting documentation that demonstrates the nature of your relationship, to initiate the process.

Once the form is submitted, USCIS will review it and the accompanying documents. At this point, they may determine that there’s sufficient evidence. If so, they’ll formally approve the application and set it to the U.S. Department of State (DOS) for further processing.

If they need more information to confirm the relationship, they’ll request it. If they establish eligibility after that, the application will be sent to the DOS. Otherwise, they may deny the form and notify you of that decision.

After sending an approved Form I-129F to the DOS, the process moves on to the next step. A U.S. Embassy or consulate in the fiancé’s / fiancée’s home nation (or closest accessible one) will receive the information, and your fiancé/fiancée can then apply for a K-1 non immigrant visa.

The K-1 visa application will require forms and supporting documents. Additionally, there will be a visa interview.

Once the fiancé/fiancée gains entry, the couple will have to meet the marriage requirements for the non-citizen to remain in the country long-term.

After a K-1 visa holder enters the U.S., a new time requirement begins. The couple only has 90 calendar days to marry one another. After 90 days, the visa is no longer valid.

The marriage ceremony and filing can occur in any state. However, it’s important to note that different states have different requirements for marriage licenses and certificates. There may be separate rules for state residents and non-residents, as well as variations in the identity verification process.

Additionally, waiting periods might be required. In some areas, there are even health checks, such as mandatory blood tests. Finally, there can be rules regarding who can perform ceremonies, the number of witness signatures necessary, and how the document is returned for filing.

Once the couple marries, the fiancé/fiancée is considered a spouse. At that point, a status adjustment with USCIS is necessary, allowing the new spouse to obtain a green card.

This process is relatively straightforward. The spouse that needs the green card has to complete a Form I-485, Application to Register Permanent Residence or Adjust Status. Along with the form, they’ll need to send supporting documentation, which can include a copy of the marriage certificate.

The Form I-485 is reviewed by USCIS. Typically, there is also an interview that both members of the couple need to attend. If approved, the spouse’s status will be updated, making them a conditional permanent resident. The green card is valid for two years.

When it’s within 90 days of the green card expiring, the couple can file a Form I-751, Petition to Remove Conditions on Residence. That may require additional supporting documentation and interviews. However, if that’s approved, the spouse becomes a lawful permanent resident.

Visas for the Children of Your Fiancé/Fiancée

If the fiancé/fiancée has eligible children, their information can be included on the initial Form F-129F, Petition for Alien Fiancé(e). Then, if the form is approved, separate visa applications can be submitted for each child. If those are approved, the children then receive K-2 non immigrant visas.

K-2 visas have similar limitations to K-1 visas. They are conditional, lasting only 90 days after entry, and will need status adjustments for the children to legally remain in the country after the marriage.

What Happens If You Don’t Get Married Within 90 Days?

Both K-1 and K-2 visas are only good for 90 days, and they are not eligible for extensions. If the marriage doesn’t occur during that window, the fiancé/fiancée and any children have to leave the U.S. at once. If they don’t, they are violating immigration law.

It is possible to apply for a K-2 visa again. However, the U.S. citizen has to wait at least two years to reapply, even if they are making the request for the same fiancé/fiancée.

Additionally, U.S. citizens are limited to two fiancé/fiancée visa petitions. Any requests beyond the two require a waiver, which can be challenging to secure. As a result, if you apply for a K-1 visa, it’s best to get married within the 90-day window. That way, the requirements are met, and the non-citizen spouse can request a status adjustment instead of having to wait and go through the process all over again.

Do You Need an Interpreter or Translator to Help with the Immigration Process?

If you need a professional interpreter or translator to help you during the immigration process, Acutrans is here.

If you are in need of language services, the Acutrans team can provide a fast, accurate, and professional solution. Contact us for a free quote today.